COVID 19 UPDATE: Like the rest of the world, we at Ravenswood Health and Wellness Center are concerned about the health crisis we are all living through and are monitoring the situation closely. During this challenging time we are maintaining two top priorities: the health and safety of our patients, and the ability to continue providing our patients the best care possible. Although cleanliness is always a priority, we have taken many extra steps and will be bringing in outside services to thoroughly clean our facility. Although Ravenswood Health and Wellness Center is concerned for the well-being of our community, we also realize we serve an important role in keeping people well. Please visit our Facebook page to access links, research, and articles about how to boost your immune system, the benefits of Chiropractic care and fighting off viruses, and our latest updates. Thank you.

The Facts About Scoliosis

Scoliosis – a curvature of the spine – is more common than people think. Between five and seven million Americans suffer from scoliosis, and patients with the condition or related issues account for over a half a million doctors visits.

Idiopathic scoliosis is the name for the condition when the cause of the scoliosis is unknown, and unfortunately this is the case with most examples of scoliosis. It can be caused by a variety of issues including bad posture, muscle spasms and legs being unequal in length. More severe issues can also be the cause of scoliosis, such as trauma, tumors or neurological problems. As with most other medical conditions, there is a wide range of functional ability for those with scoliosis. Some, who are able to have their condition treated and reduced, can take part in normal, everyday activities. Unfortunately, though, those with structural scoliosis suffer from a more severe version of the condition and are unable to be helped through chiropractic treatment.

Scoliosis usually affects the posture, but in more serious cases can also cause severe pain, hinder mobility and impede normal heart and lung function. Scoliosis affects not only the physical body, but a patient’s emotional health as well. Especially in the case of adolescents, scoliosis can have a negative impact on self-esteem and behavior.

One positive is that most cases of scoliosis involve a curvature of the spine at an angle of 20 degrees or less, and this type of curve in the spine is not noticeable by the untrained eye. These smaller curvatures are usually not a cause for serious worry; however, children with scoliosis are always a concern as their bones are growing at a rapid pace. A small curve could turn into a much larger problem over the course of just a few months because of how quickly children grow. Frequent doctor visits are important for anyone with scoliosis, but for children especially.

Most patients with scoliosis notice a light progression of the condition over time and do not need heavy medical intervention. However, girls who are pre-menstrual and have curvatures of more than 25 degrees in their spines are at a high risk of severe scoliosis. Girls experience major growth in the year prior to beginning menstruation. If a curvature of the spine is discovered during this time, the likelihood is that it will quickly worsen. If a girl is already menstruating when scoliosis is discovered, the condition does not progress as rapidly.

Scoliosis can be discovered through various methods. During a routine checkup, a postural exam may detect a curve in the spine. If this happens, the patient would likely be sent to a specialist for further evaluation. The specialist will arrange an x-ray to determine where the spine curves and how severe the situation may be. An x-ray will also show whether any other part of the body (including organs) has been affected by the scoliosis. A wrist examination will also be performed in order to discover the skeletal age of the patient. This will allow doctors to determine how the scoliosis has advanced up to that point and how it will likely progress in the future. Depending on the results of these tests, the doctor will be able to determine whether the patient needs to have further x-rays and examinations on either a monthly or yearly basis.

After scoliosis is diagnosed, a doctor uses a Scoliometer to take measurements of the angle and size of the curve that has formed in the spine. The Scoliometer is totally non-invasive and does not cause any pain to patients. It is not used to detect scoliosis, only to monitor existing conditions.

As most cases of scoliosis are mild, the physical problems that result are not significant, and patients generally only require careful monitoring. Scoliosis usually doesn’t keep people from leading normal, active lives. In more severe cases, though, the use of a brace, or surgery, is the treatment options. The brace is often prescribed for children who are still growing, yet already have a spinal curve of over 25 degrees. It is used to â€œfixâ€ the angle. If the curvature is more severe, over 45 degrees, surgery is usually recommended in order to correct any impact on a patient’s vital organs. Surgery as a treatment for scoliosis is very rare.

While chiropractic treatments can not cure or lessen the degree of one’s scoliosis, therapies such as spinal manipulation, electric muscle stimulation and exercise can ease the pain of the condition.

If you experience spinal discomfort or suspect that you may have scoliosis, schedule an examination with your physician immediately. 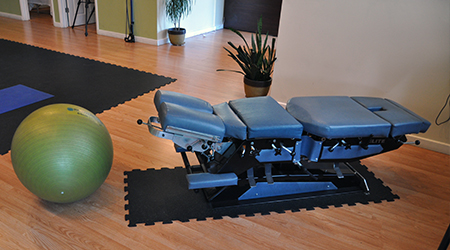 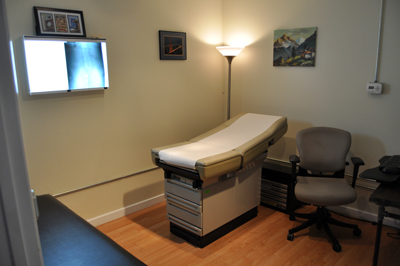 We believe in natural healing: a comprehensive approach to chiropractic care which features adjustments, rehabilitation, therapy, and the balance of proper nutrition. For more information, or to schedule an appointment, contact us today. We look forward to meeting you!